Finals are set at the Fistball IFA U18 World Championships

The first two games would decide witch teams can follow Germany, Austria and Brasil into the semifinals. The women were starting with the game Switzerland against USA. Switzerland won the game in 2 straight sets and would have to face Germany in the semifinal later the same day.

The game was followed by the men with Switzerland against India. The Swiss team liked to follow the example from the game before and they managed to do it and also won in 2 sets and will play the semifinal against Austria.

Now the semifinals will start with the women Austria against Brasil. The game was a tight one from the beginning with good scenes on both sides. At the end the Brasilian girls could get revenge for the lost game in the preliminary round and won the game 4:2.

Following this game was the first men’s semifinal between Germany and Brasil. The Brasilian boys were taking the spirit of the game before into this one. The game was very intense and tight so that it has to go over the full distance of 7 sets. At the end Team Germany one with 4:3.

Now the German women would play there semifinal against Switzerland. The German team played a very good preliminary round and wanted to show the full stands what the can and they did just this. The won 3:1 and are following Brasil into the final. Switzerland will play against Austria for the bronze medal.

The last game of the day was Austria against Switzerland for the boys 2nd semifinal. The Swiss boys tried very hard to move on to the final but in the end the Austrian Team was better and won 3:0. So Austria and Germany will play the final willst Switzerland and Brasil will compete for Bronze.

So both Teams of the Hostcountry Germany are in the Final and won at least Silver.

Here the full results, schedule for the Medalgames and action pictures. 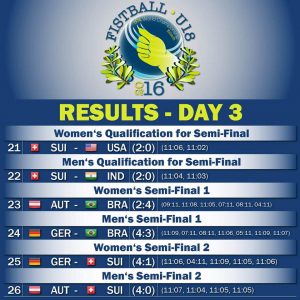