The coming weekend will be a new milestone in the history of Fistball. The IFA 2016 Men’s World Cup will take place in Capetown South Africa. Also it will be the first time in the history of the IFA World Cup that there are four team participating, with a team from Europa, South America, Africa and Oceania. Europe will be represented by the European Cup Champion 2015 TSV Pfungstadt from Germany. Club Mercedes from Brazil will compete for South America. The South Melbourne Fistball Club from Australia will represent Oceania and last but not least the host Team: The Archbishops of Banterbury.

The World Cup will be held at Vygieskraal Sports Ground. There will be a preliminary round with best of 5 games between all the teams on Friday. On Saturday there will be the small and the big final. Both games will be played best of 7 sets.

The winner will take home this beautiful trophy: 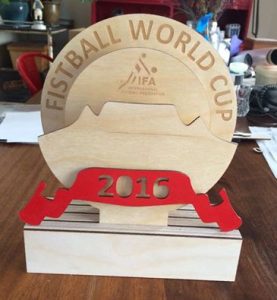