The National Kenyan Minigolf Federation hosted the first African Minigolf Summit in Kisumu from September 16th-18th, 2016 with participants from Burundi, Democratic Republic of the Congo, Ghana, Kenya, Nigeria and Tanzania.  The Summit was a great success with Statutes of African Minigolf Sport Federation established and an election of a full board.  The board will be led by Wycliffe Ngoya (Kenya) as President and Talal Fattal (Ghana) as Secretary General. 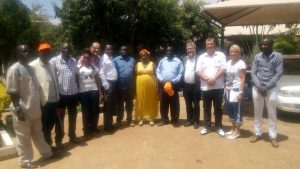 Participants of the African Minigolf Summit

Grass-roots projects for minigolf development and individual adaption for different countries were discussed widely and with great interest. The World Minigolf Federation (WMF), supporting the Olympic movement and importance of social responsibility for a better world, offered its support for national projects and education programs for kids, players, coaches and referees.

Social projects for Democratic Republic of the Congo (peace) and Kenya (youth communication center) have been initiated. The first African Minigolf Resort was discussed to be built up on the area of a private school close to Kisumu, where minigolf would be integrated in the official school sport. Alice Kobisch, Minigolf Ambassador and former World Champion, promoted the Minigolf-Kids foundation at the Summit.  The Minigolf-Kids foundation was co-founded by her and the current WMF President, who was also in attendance.

These projects have been discussed with the United Nations, represented by Dana Podmolikova who represents the Sport and Urban Development at the UN-Habitat Headquarters in Nairobi, Kenya.  Minigolf is a perfect tool for social programs based on its small space requirements, physical activity base, fun through games, and its extremely communicative character.

On his way home, WMF President Gerhard Zimmermann took the opportunity to discuss a global WMF marketing strategy with an experienced company in Nairobi that specializes in sports development and sports marketing.

Minigolf on the African Continent needs your help for a kick-off as a tool to bring visibility and help solve existing problems through sport (e.g. help for better quality of drinking water, reduce existing health problems of kids). Your donation to support these minigolf projects in Africa, through the Minigolf-Kids foundation, is very much appreciated. Small amounts of money are very welcome and will also make a difference. To donate directly, please transfer the money to the account of “Förderstiftung Minigolf-Kids”, IBAN:   DE16 7705 0000 0000 0067 67, BIC:  BYLADEM1SKB    headword „Africa“.

The city of Accra, Ghana is scheduled to host the second African Minigolf Summit in 2017, with the first African Championships following in 2018.  The African Minigolf Sport Federation is working to host 15 participating countries for both events.

The World Minigolf Sport Federation (WMF) is the umbrella organization of 62 Minigolf sports associations worldwide with continental associations in Africa, America, Asia, Europe and Oceania. There are more than 38,000 competitive minigolf players registered with the WMF via the 62 member nations, with 900-plus clubs between them. Over 1,000 courses are approved for official competitions and over 1,500 minigolf tournaments are held each year.