Yesterday’s Press Conference hosted by IFMA to announce and celebrate their recent IOC recognition was one that was watched by IFMA members, stakeholders, muaythai fans and members of the world sporting family across the globe.

Both international and national press and media filled the Grand Ballroom at the Grande Sheraton Sukhumvit Hotel together with honoured guests, Ambassadors and Counsellors from various embassies, representatives from UNWomen, UNESCO, the Royal Thai Government and National Olympic Committee of Thailand, IFMA Executive Board members which flew in from around the world and leading members of the IFMA Athlete commission.

The Press Conference kicked off with a warm welcome from the host Elizabeth Sadler followed by a presentation of IFMA’s partner organisations via a flag ceremony which told the story of IFMA’s past to present showcasing the various achievements from 1993 when it started with just with 20 National Federations to the present where it boasts 130 proud members. 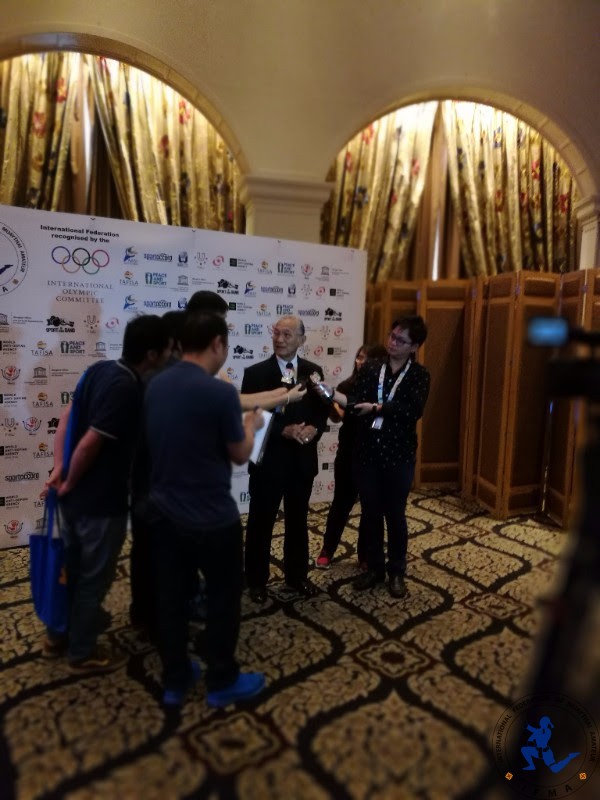 MA President Dr. Sakchye Tapsuwan gave an emotional speech in which he reflected on the past twenty years and how IFMA had grown into “a valuable, recognisable, credible member of the world sport family – SportAccord, the International World Games Association, FISU, TAFISA, OCA, a former member of AIMS and newest member of ARISF – all of them IOC recognised organisations…”. The President shared an emotional moment when he said “now we have reached our dream of being recognized as an international sport federation, and I must admit that when our General Secretary whom has been part of this process for more than 20 years, called me in the early hours of December 7th, I felt truly proud.”

He went on to thank the multi-national IFMA international office and expressed his deep gratitude for the leadership and work of General Secretary Stephan Fox and Sport Director Charissa Tynan. In closing, he said “I would like to thank the IOC and its President Dr. Bach for their trust, the IOC Sports Department for their guidance and evaluation, and as muaythai is a 1000 years old, the future has just begun.”

The host then welcomed Ms Charissa Tynan, IFMA Sport Director to the podium. Ms. Tynan took the opportunity to speak from the heart and shared her ten-year journey with the “IFMA Family” which she explained was made up of “those who inspire be it through their ability to compete, regulate, govern, lead or advocate for creating a positive change through the power of sport.” She spoke of the various aspects of the federation which were particularly inspiring to her like universality and cultural understanding, good governance and gender equality being demonstrated throughout the IFMA organisation, “…with two (2) female Continental Federation Presidents, namely Oceania and Pan America.

Furthermore, we have seven (7) member National Federations led by female Presidents and many of our most important Commissions have female chairs. This is not something we established yesterday, but rather, it is the result of the gender equality which is organic to our family, where men & women work side by side towards a common goal”. She finished by thanking the IOC for honouring the IFMA’s work and pledged to continue striving for excellence to prove time and again that IFMA and muaythai are a valuable addition to the Olympic movement. 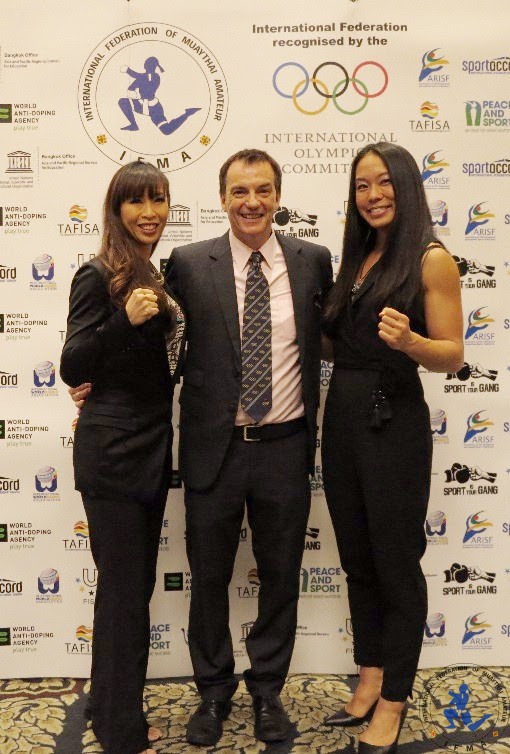 Next to the podium was Janice Lyn, Chair of the IFMA Athletes Commission. As spokesperson for the athletes, she shared her experience competing at IFMA events and the growth that she has seen in the organisation. “…the IFMA family has grown, not just in numbers but it has become stronger, just like an athlete becomes stronger and evolves when they are faced with adversity, when they have a goal and when they have a dream in mind”. She went on to list the notable points of development she has experienced in her years with IFMA and said IFMA is more “balanced”, “youthful” and “liberated”.

She thanked the IFMA for its education and resources to facilitate a clean athlete and protect athletes health, as well as the post-athlete career programme “which helps young athletes plan for their future”. She concluded by thanking the IFMA President Dr. Sakchye for his guidance with “grace, tradition and wisdom” and also the IFMA General Secretary Stephan Fox for his “hard work, grit and ingenuity”. She thanked the IFMA executive board for their commitment to the athletes and all other chairs of the various commissions working together for common goals. She capped off by saying “IFMA had a dream and we made it come true. This is not the end however; it is very much the beginning of an exciting era for muaythai”.

Ms. Lyn’s address was followed by some short words of congratulations from representatives of UNWomen and UNESCO. Muaythai legendary athlete Buakaw Banchamek was also in attendance walking in the UNwomen flag has muaythai’s HeForShe Ambassador.

Last but not least, the IFMA General Secretary, SportAccord Vice President and AIMS President Stephan Fox was invited to the podium. He started first by thanking all those that had the vision for muaythai; the former IFMA Presidents Mr. Boonyuen and General Vorayudh. He expressed gratitude to what he called the “Old Guard” of Muaythai and thanked former Privy Councillor General Pichitr Kullavanijaya, WMC President General Chetta Thanajaro, IFMA President Dr. Sakchye Tapsuwan and IFMA Treasurer Mr. Kajorn Prowsree. He noted the presence of the various embassies that honoured IFMA by their presence at the Press Conference.

He explained how IFMA’s IOC recognition was not an overnight success, but has been a learning process in which the IFMA had the opportunity to grow, develop and rise to its potential. He said “it is also about knowledge sharing, recognising the expertise of others and being a part of recognised sport; working towards credibility and for the betterment of society”.  He stressed the importance of the various alliances that IFMA made within the world sport community like those made with SportAccord lead by Patrick Baumann (IOC member), ARISF President Rafaelle Chiulli, AIOWF President Gian Franco Kasper (IOC EB member), IWGA President Jose Perurena (IOC member), United World Wrestling President and IOC Member Nenad Lalovic and so many others … all of whom supported and guided IFMA through the journey. 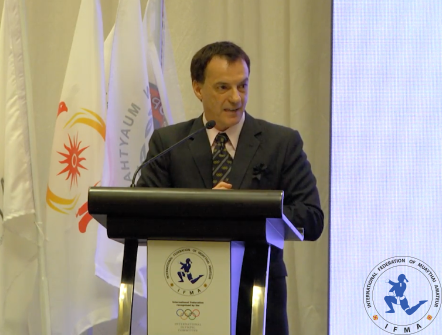 He then thanked the various partner organisations’ Presidents like HSH Prince Albert II of P&S and Joel Bouzou of WOA, HRH Prince Feisal of Generations for Peace, Oleg Matysin and Eric Saintrond of FISU and Sheikh Al Sabah of the OCA noting that the OCA was the first organisation within the Olympic movement to recognise IFMA in 2006. He concluded by thanking the IOC President Dr. Bach for his vision and credibility in the world of sport the IOC Executive board for thier trust in IFMA; the IOC Director General Christophe De Kepper and the IOC Sports Department Kit McConnell, Jennifer Mann and Mike Joyce for their transparency and professionalism in the application process. Last but not least, he thanked the heart and soul of IFMA…. The athletes. 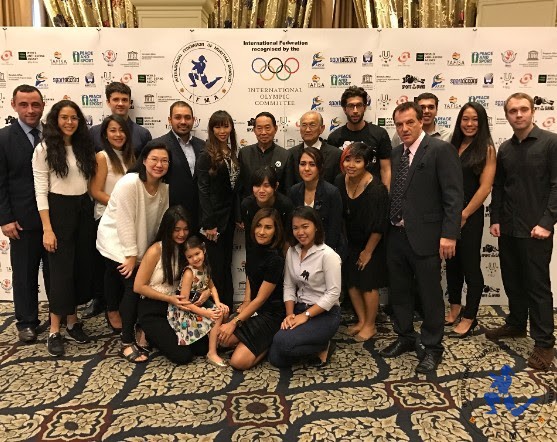