On the fourth day of the IFA 2016 Fistball Women’s World Championship we saw two semifinal matches and two matches to determine the fifth, sixth and seventh places in the tournament, respectively.

The players and fans were fortunate to have excellent weather, and we witnessed a great atmosphere. Playing on home turf, the Brazilian team delivered an excellent performance in the semifinal match against Switzerland, and scored a clear victory (3:0).

In the second semifinal match, defending champion Germany played versus the tournament’s surprise team Chile which had managed to qualify for the semifinals for the first time in their World Championship history. The German team advanced to tomorrow’s final in a confident manner where it is now facing Brazil. Switzerland and Chile will play for the Bronze medal.

Team Austria compensated for its disappointment of not qualifying for the semifinals with a clear victory over Australia. The Argentinian team, on place six after the preliminary round, also won over Australia.

The Australian team hence finishes the tournament on the seventh place. As they return home, the Australian players take with them the invaluable experiences they have gathered from game to game and the many friendships they have won.

Austria and Argentina met on the last day of the tournament to play for the fifth place. We saw fascinating fistball with long rallies and a dramatic flow of events. In the first set, Austria took the lead and pulled ahead quickly. The Argentinian team came back too late, and the set went to Austria (11:7). In set two, the Argentinians got into the game quicker, took over the lead at 3:2 and kept control throughout the set, winning it 11:8. In the decisive third set, the Argentinian squad initially took the lead. However, the Austrian team bounced back at 3:2 and sealed the deal, winning the set with 11:5. Austria hence finished fifth in the tournament, and Argentina took home the sixth place.

Switzerland and the tournament’s surprise team Chile played for the bronze medal. The fans in the stadium and on the livestream witnessed excellent fistball and a great atmosphere. Eventually, the favored team from Switzerland scored a decisive four-set victory.
The young Chilean team started strong into the match, leading until midway of set one, when Switzerland seized control and won the set (11:7). The Swiss dominance continued into set two, but Chile bounced back and kept the set open before the Swiss team sealed the deal (11:8). Set three almost mirrored the events of the second set – following an early lead by the Swiss team, the Chilean squad came back but eventually lost the set again. In set four, Chile pushed hard to turn things around: we saw great rallies and the Chileans established a comfortable lead. However, at 3:7 Switzerland bounced back and eventually re-seized control, winning the fourth set with 11:9, and hence the match with 4:0. A historic achievement for the Chilean team, as they had reached the semifinals for the first time. “We are still lacking a bit of competition experience, but we gave our best and have a great, young team for the next World Championship”, said Chile’s player Constanza Mödinger after the match.

Defending champion Germany and host Brazil played for the title in the final of the IFA 2016 Women’s World Championship. 810 spectators in the stadium and all the fans watching worldwide through livestream witnessed a great match, excellent fistball and a dramatic flow of events.
The first set was a tight affair until 8:8 when the hosts pulled ahead decisively and secured the set win. Throughout the match, we saw great performances by the two teams’ attackers – Tatiane Schneider (Brazil) and Sonja Pfrommer (Germany). The latter’s attacks were in particular key to help the German team bounce back in set two with a clear set win.The third set was an absolute thriller with both teams tied until 14:14 when the Seleção made the decisive point. Set four remained a tight affair with both teams being head-to-head until 9:9 when the German team seized control and secured the set win.The match continued in that manner in the fifth set, with Germany quickly pulling ahead and driving home a clear set win. With Germany leading 3:2 in sets, Brazil came back strongly in the seventh set – the hosts kept the game open until midway of the set when the German team re-seized control to drive home an 11:6 set win.

Below the final result and some impressions of the medal ceremony. 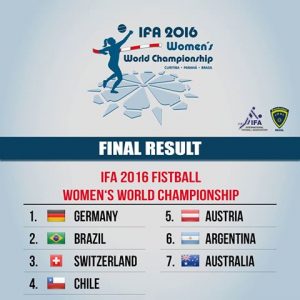 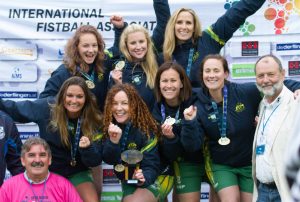 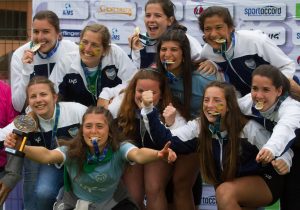 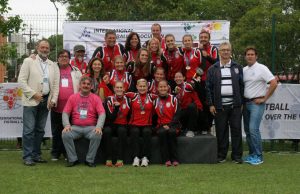 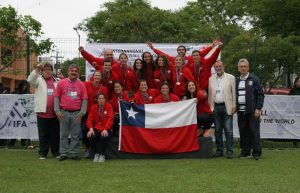 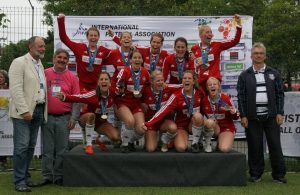 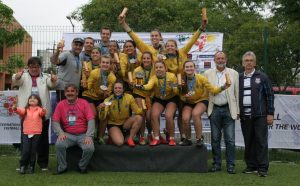 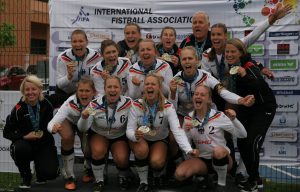