FAIRPLAY is one of the five pillars in Muaythai and the mantra in muaythai is “to rather lose in honour than win in dishonesty.”

IFMA for many years, prides itself on its anti-doping policies, educational programmes and workshops where prevention is the key, but at the same time are not afraid to admit that offenders can slip through the net, especially with non-Olympic sports since the moderate budget is used mainly for elite athletes in elite level competitions.

In January 2015, the new World Anti-Doping Code came into force with the recommendation to implement intelligence and investigation into the IF’s testing programme. IFMA has incorporated this firmly into our battle to protect the clean athlete. A special task force was set up to act immediately on these recommendations; under the chair of the Medical Commission, IFMA executive committee member Dr. Erdogan Aydin, to gather intelligence and conduct investigations in partnership with national federations, doctors, officials, promoters, coaches to carry out systemized targeted testing. As part of that and for other ethics-based reasons, IFMA also opened a confidential whistle-blower line via the federation website.

The mission of this task-force is clear… “Catch the Offenders!”

Due to the detailed information fed back to Dr Aydin’s team by this cooperation, IFMA is able to focus the tests directly on quality instead of quantity.

Dr. Aydin stated that “In 2015 more than 70% of doping offences were uncovered by the work of this taskforce on systematic testing. While normally 80% of the testing has been done at elite level tournaments, all events this time were included regardless of the importance or scale.”

Dr. Aydin also stated that in past years, results showed decreasing number of offenders among the elite athletes. For example, in 2014, 225 samples were tested with a rate of 2.6% resulting in an Adverse Analytical Finding. This percentage has been consistent for years.

Through systematic testing using a smaller number of tests, a higher number of offenders were identified last year which proves that strategic testing can be successful. Dr. Aydin said that testing at the right places based on information received on doping and recreational drugs-use and at the right time has led to the positive outcome of protecting the clean athletes at all levels. He added: “We come prepared with one simple mission to protect the good and punish the bad. Certainly elite athletinue to be tested, and the good news is that at the elite level, meaning world and continental championships, no violations have been reported. The negative effect of the intensive target testing and IFMA Anti-Doping Task Force would obviously be that for 2015 and 2016 the percentage of AAFs will rise, but the message is clear; if you cheat, we will get you.”

IFMA President, Dr Sakchye Tapsuwan, hailed the success, he stated that especially in Thailand, a clear example has been set with target testing that can now be adopted by other sports, based on the IFMA model. 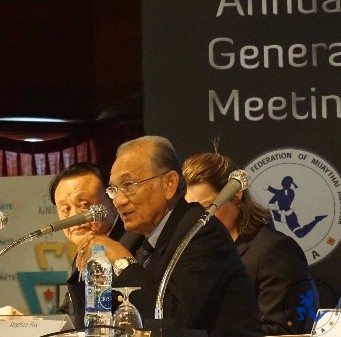 Dr. Aydin stated the same about Turkey, though through the task force Turkey emerged with the highest number of offences yet – it is a success for the future of the sport and not a failure.

Chair of the IFMA Athletes Commission Janice Lyn stated:
“Forgiving plays an important part in muaythai. We engage ourselves in many social projects like Sport Is Your Gang where kids who walked the wrong path in life but through the power of sport are now finding the right path. This is why the Athlete’s Commission plays an important part in communicating with the offenders in these cases to make them understand basically you do the crime, you do the time…..But afterwards the door is always open to play an even more important part in our family in educating others in the importance of Fair Play. This is not only in sport but in life.”

IFMA Sport Director, Charissa Tynan stated that closer cooperation with WADA, SportAccord DFSU, the IOC and IOC-recognised organisations, is essential in order to continue this vital work. Examples of recent collaboration include having WADA President Sir Craig Reedie as a keynote speaker at the recent AIMS conference, and ARISF opening their annual WADA Anti-Doping workshop to AIMS Member federations. Ms Tynan added “We should not isolate ourselves but instead use every possible resource available to exchange knowledge and experience which can only benefit all sport.”

Mervyn Tan, chair of the IFMA Legal Commission said that IFMA is more than just a sporting organization.
He stated: “The legal system is based around the principle of rehabilitation. And in IFMA we also add forgiveness. That is everyone plays their role in the Fair Play house including the athletes. This way the new generation will not make the same mistakes…”

“Such a subjective approach to enforcement of the anti-doping stance adopted by IFMA would undoubtedly see a long term benefit for the sport and future Athletes. Notwithstanding the likely spike in statistical figures, it is a much lauded and brave move by IFMA to tackle all issues head on to seek to solve and remedy as opposed to short term remedies and ineffectual policies. Strict enforcement sends a clear and resounding message of zero tolerance towards doping in our sport.” – Mervyn Tan, IFMA Legal Commission Chair