A historic joint welcome dinner hosted by IWGA, ARISF and AIMS was held at the Olympic Museum on the night of the 18th of April. The room was filled with representatives from over 60 international recognised sporting federations  grouped together in ARISF and AIMS  and many of them also members of IWGA and  included in the World Games program. 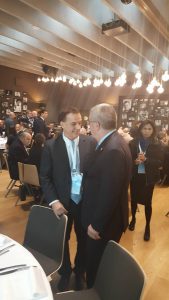 IWGA, led by President Jose Perurena, who is also an IOC Member; ARISF members, led by President Raffaele Chiulli and AIMS represented with Stephan Fox as President; all present to celebrate the opening of the SportAccord Convention for 2016 in the Olympic Capital of Lausanne  and no place would be more fitting than the Olympic Museum in the Olympic capital. Mr Chiulli shared on the expectations of the SAC and the warmth of coming together as a family for the united love of sport.

The night was especially honoured by presence of the IOC President Dr Thomas Bach along with the 4 IOC Vice Presidents, the Director General and Deputy Director General,the IOC Sport Director, the IOC  Head of Relations  and many others, showing the level of cooperation between the IOC, the IOC recognized umbrella groups and federations and  multi sport organisations.
Dr Bach shared heart felt words on the mandate we have on sport and the endeavours of the IOC for the future of sport and Agenda 2020.The cooperation and understanding of all stakeholders of the Olympic Movement is key and this wonderful evening  brought everyone even close together.