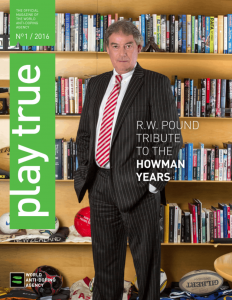 Every edition of the magazine includes sections on WADA’s main activities: from anti-doping development to athlete outreach, education to compliance, and science to testing.

In this edition, WADA honours the former Director General David Howman, who after 13 years at the Agency, chose not to seek an extension of his mandate in order to return to his native New Zealand. The magazine includes feature on Russian whistle blowers Vitaly and Yuliya Stepanov.

You can also read about the latest on WADA’s contributions to testing for gene doping, the Agency’s new power of investigations, a look into the numbers behind all the tests that are performed by WADA laboratories plus much more.

The new digital-only Play True is released biannually, with the next edition expected at the end of the year.